So I didn't post last night. It seems that I really made some people upset by not posting since, gasp, Friday. I hope your supervisor at work didn't fire you yesterday as you went through symptoms of withdrawl. I tried to include extra pictures for you to stare at.

Sat was "Take a Kid to Steeplechase and Go Mountain Biking in the Hopes that they Continue to do it as they Get Older Day". After running back home and getting my bike, oops, and then getting lost during a "shortcut", I found my way out to Steeplechase. The weather that day was in the high 50's, but it felt much
colder than that witht the wind that you were exposed to on the top of Steeplchase ski area. The trails out there are great and there were obstacles set up for the young'ns to try. 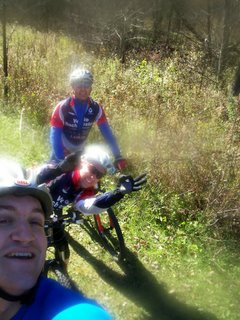 After hanging out for a bit I caught up to Al "thanks for the frame" Schmidt (top) and Sugardaddy (throwing up gang signs). The 3/4 of an ugly mug is myself. 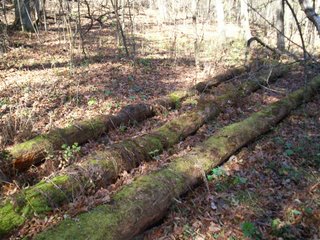 I took them exporing for new trail. We ran into this set of three logs and I was proud of the fact that I was able to ride over them. Three cheers to me! 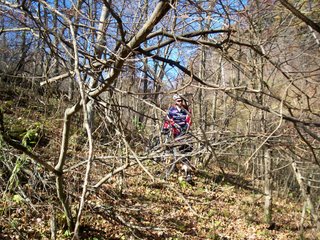 Right here, Sugardaddy is questioning the logic in following my exploration. 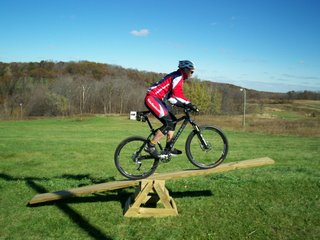 After watching 5 year olds run up and down this teeter totter all day MC Sugar finally got the nerve to try it. It took many deep breaths, and he was calling out to the spirit of Oprah Winfrey for help, but Mark (and about a dozen elementary school kids) did conquer this wild beast. After which he kissed the ground and went to change his pants.

Sunday was my Grandparents 60th, that's right 60th, anniversary party. Fun times were had by the 50+ children, grandchildren, and great-grandchildren. After that Becky and I headed over to Red Wing and rode at Memorial park. We had tons of fun despite Becky taking a low speed fall and bruising her hip. Sorry, no pics. I forgot : (


Well, that is it for now. I hope your boss appreciates the fact you are in a more chipper mood today.
Posted by Charly Tri at 6:58 AM

Whew... Finally an update
I didn't know you were in "Lord of the Dance." That must be where you developed your 3 logs skills. Okay, I just made up the lord of the dance part, but you could be in it.. totally.