Cable Classic and the back up bike. 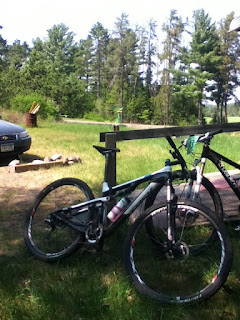 Well, I didn't work much at selling last year's bike, so I had to slum it on a 2011 ride. Sure, it may be a super fast carbon Trek Superfly with sram xx and carbon wheels, I may have barely ridden it last year, but it is still so "last year". Oh, and it is for sale with race x-lite or xxx-lite wheels.

The Cable Classic went pretty good. A race Tuesday then Thursday had my legs with no snap and lots of pain right off the bat on Saturday. Scott K-Y led it basically the entire way at the start as I kept getting boxed in and grabbing the wrong wheel. As we approached the singletrack Scott would almost get crashed out as a few wheel suckers would make dangerous passes trying to get by before the ribbon's of dirt (I thought these were uncalled for after no one would work with Scott).

Through the dirt and back on the road my legs were not having it. I watched the front guys ride away and I just rode a relaxed pace. The legs would get a little better about half way and I would proceed to pass and catch 2 riders. Next I would find Mike B. and he sat on as I powered us the last few miles of rails to trails. He sat up at the finish. I guess I got 6th which really surprised me considering how the legs felt cooked all race.

Next is a night ride and a long ride up here with the cabin mates and sweet trails. Way better than racing a state race or gravel. Oh, and got to watch a bear for a few minutes from the cabin this morning. I love it here!
Posted by Charly Tri at 2:57 PM 1 comment:

So yeah, my 17.5" 2012 Trek Superfly 100 Pro with American Classic/Stan's Arch Ex wheels was stolen out of my car in my driveway Tuesday night.  I forgot to bring it in after setting the course record (31:49 vs 31:50) at Eastwood.  Several other cars were broken into as well.  Serial number is WTU079T507oG.
Last night's Buck Hill race was interesting.  I got there late after 2 poop stops (kid, not me).  Lined up with no warm up and on last year's bike which felt really different.  Started moderately, hit singletrack, felt the front end loose, slide out hard because of a really low front tire, lost a bunch of spots, stopped at the Penn truck to pump it up at the end of lap 1, lost a bunch of spots, then started counting the people in my race I passed until the finish (not the rec riders).  16 the 2nd lap, 7 the 3rd lap, 2 the last lap.  I went from the 40's to around 18th.  Felt a lot better in the breathing department.
Couple of notes:
Going to do Cable, on last year;s bike, that is for sale.  Hit me up.
My allergies had been crazy bad, which made my breathing crazy bad, found a great remedy.
I am going to ride super fun trails in NW WI while most racers ride Afton (not a fan) for several laps.  I already won.
Anyone looking for lodging for the classic and riding the next day?  507-254-8936.  Me and Triguy will have room.
I am the king of Eastwood, no way Matt can touch my time.
Posted by Charly Tri at 10:15 AM 5 comments:

because this just got swiped from my car overnight.
Posted by Charly Tri at 8:07 AM 7 comments:

I am in need of some updates:

The Sandwich 50 went off without much troubles at all despite the rain trying to make trouble.  I felt decent power for the first 3 laps and then my body started to shut down hard towards the end of the 4th; similar to what happened at the end of Transiowa.  Taking stock of my life over the last several weeks I finally admitted to myself that I have been desperately void of rest, and my body was simply exhausted.  I stopped in order to survive for another day.  The day was fun though, no doubt.  This last week has seen mucho sleepo.  It is nice.

The first Thursday night at Buck Hill was a different story.  My little time warming up had me breathing hard and weak legs.  That is typical until the lungs open up so I wasn't too worried.  Usually during the 4 laps around the 2ish mile course I spend the first lap struggling and then get stronger as the lungs open more.  Well, the first two laps I was gasping for air much more than normal, just trying to survive.  I watched hoards of people ride by me on the hill as I pedaled like a little girl.  Frankly, my pace was a little embarrassing up the "mountain".  Towards the end of the 2nd lap the lungs came around just a tad and I rode like a big girl.  I think in the last lap alone I passed 7 riders, still not 100% there.  Crossing the finish I went into full blown asthma attack.  No cool down unless you count laying on the ground for many minutes, too weak to even stand.  It was over an hour later until my breathing was anywhere near back to normal.  This asthma stuff really sucks sometimes.

The rest of the weekend was spent with the family up at the cabin, shredding local trails.  More than once, while riding by myself, I laughed out loud like a little kid playing with his toys.  Tis the season for ticks and mosquitoes up there.  It always seems to get better in the summer and fall.  It really is not a problem as long as you don't stop too long on the trail and check yourself after the ride.  Interestingly enough, I don't remember a single mosquito around the cabin.

So our 3 1/2 year old daughter has been fighting potty training.  Oddly, the other night she announced she needed to go potty.  She came back with the announcement that she went poopy (the biggest obstacle by far).  Our little girl is finally turning into a "big girl".

Posted by Charly Tri at 8:47 AM No comments: 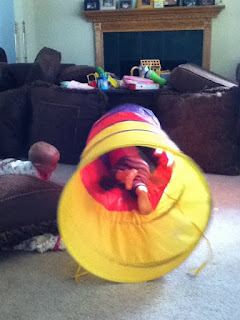 Gotta say, this race was about the most "chillexed" I have been in a long time.  Whether it was getting ready at the hotel room with my roommate Charles, hanging out at the prerace dinner, or waking up the next morning.  No nerves, just looking to ride and have fun.

We just missed nasty weather as we lined up at 4am in Grinnell, IA.  I was thankful because I didn't feel like riding in the rain when it was just under 40 degrees.  The start was cool as there were 70 or so pairs of lights headed out into the Iowa countryside.  What we found for the first 15 miles was strong headwinds and fresh gravel.  Somewhere around dawn the gravel became a little less annoying and our direction was not straight into the wind.  At the first checkpoint (52 miles in) I caught back up with the front group after a stop to stretch out the knee that now caused me pain.

There were six of us; Matt and Travis Braun, Eric Brunt, John Gorilla, and Troy Krause.  Into another headwind we formed a single file line that would soon slow up to allow a few riders that were dropping off not to brave the wind alone.  This happened a few times until a right turn and I found myself alone with the Braun brothers.

Talk about fun!  We talked about all sorts of things, but primarily the discussion revolved around the belief by many that the Salsa Fargo is the best bike out there for almost any situation.  Our glowing praise of a bike that could be just as comfortable as a cyclocross bike as it could be with a double clamp raging downhills caused us to break into song many times.  Oh, the fun we had!  We had especially great plans for the watch if we came in together for the win!  The planned rumor of a mystery rider on a Fargo off the front never gained steam as G-Ted laughed it off.


Downhill Fargo ready for the world cup, John Travolta singing it's praises.  You probably can't tell, but this was photoshopped.  Thanks to Matt Braun for this masterpiece.


Well, at about 140 miles in I started to get dizzy and the engine room started to shut off the power.  A few flats later thanks to some random large chunks of gravel and the Braun brothers remained by my side, determined that we at least get to the 2nd checkpoint (170 miles in) together.  I stopped a few times for dizziness, but the brothers from the same mother seemed more frustrated that the lighter wasn't working for their fireworks than the fact I was causing them to lose time.

At mile 170 I told them to go on.  I would briefly join the next group behind us that had not been seen for 70 miles.  At the 2nd checkpoint we had a 20 minute lead.  Ten miles later after riding by myself and trying to get in a groove the wheels completely came off.  I ended up with 200 miles for the day after riding to a nearby town and a huge smile from the fun I had.  In my heart I never had the fire to finish the race, but that was fine.

Ari, Gumby, and Tim came to pick me up and the fun continued all the way back to the start.  Thanks guys!  Thanks to the Brauns!  Thanks to Charles and good job out there!  Thanks to G-Ted for the race!

J-No and Brian, you are still dead to me.