Race start is 7am, low of -28F at start, high of -15F.  Happy to be here and healthy after what I went throught this week.  Thanks to my family for their help, especially my smoking hot wife.  Thanks to 9:zero:7 for making a bike that kicks ass for stuff like this.  Follow progress here: http://www.arrowheadultra.com/index.php/results/2014-results 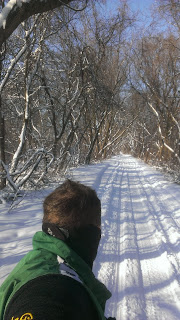 So this winter I had my sights on a Tuscobia 150 win and an Iditarod Trail decent finish.  I figured with the training, Arrowhead 135 would take care of itself.

Well, I had great legs pretty much all day at Tuscobia, but stomach issues made things interesting.  That stomach bug has been flaring up a bit, adding to the cold, and bad ankle sprain I have dealt with since the race.  Needless to say, I have been in rough shape and I don't expect to light up the trail.  In fact, had the race been held Wednesday I would have been declined to start as every muscle ached with whatever I have.  Thursday was not as bad, but not good and may have resulted in a DNS as well.

Anyways, I did finally get out for a couple 4 hour rides this weekend.  Lots of new soft snow made things fun (see picture) and I was happy with my fitness considering how things have been going

I also have been very happy with the Wolftooth GC cog I am lucky to test.  I can't really show a pic, but here is my GC damage free cassette body as it has a nice large base.  The rest of the cogs, well, they have made their mark. 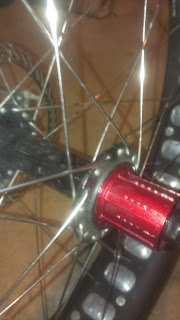 Posted by Charly Tri at 7:31 AM No comments:

Yeah, yeah, yeah my blogging has been poopy this year.  Let's change that, eh?

So it has been 2 weeks now since the Tuscobia 150: 150 miles on snowmobile trails that closely follow an old railroad bed.  The course is 75 miles out, 75 miles back.  We pass through the town of Winter and Birchwood twice, both of them checkpoints.  Winter is roughly 30 and 120 miles into the race, Birchwood is roughly 63 and 87 miles in.

Approaching the race the I spied Chris Plesko making his return to winter ultras and an experienced strong endurance racer of Mtn Bike Radio fame, Ben Welnek.  Both I figured would be hard to beat, but I prepared mentally for Ben and I to duke it out all race.

We started in the dark Saturday morning, temp roughly around 20F with highs for the day to get into the 30's.  A low psi day.  Ben, Chris, and I would hit the trail on the front.  They pulled to the side to let me lead despite my intention to follow.  I was happy as I thought the three of us would ride together and be able to chat at least for awhile so I set out to warm up and not fly out of the gate.  Imagine my surprise when roughly a mile later we crossed a road and I realized I had a gap.  That gap would open more, and as I went off the trail and back on to get through the first checkpoint I did not see another rider.  Well, that was a surprise.

Leading up to this race my children had been sick with some type of stomach bug and the wife and I had what felt like nervous knots in our stomachs.  Well, around miles 20-50 my stomach started to get nauseous, the trail got really soft from the warmth of the day, and a great deal of snowmobiles passed by.  The area up there at the start of the race had beautiful puffs of snow on all the bare branchs.  With the increased heat of the day those puffs started dropping like bombs the Obamacare website drops connections.  At any given moment I could see multiple snow bombs dropping.  It was pretty surreal in a way.  During that time I had a chance to talk with Mark Scotch on his way back.  He was the only skier, but still pressed on as if he was being chased which I highly respect. Buffington was putting on a show in the 150 run as well and I had a chance to stop and chat with him.  Pulling into  Birchwood my stomach was a tad better and I found out I had a 24 minute lead at CP #1, a big surprise.  I had run out of water as the day had really gotten warm and the trail was really soft.  It was tough, slow going and I was nearly running on the rim in the front and really low in the back with PSI.

Out the door my stomach really liked the bread from the PB&J at Birchwood and seemed to be doing better.  The trail to the turnaround and back was really soft and chewed up.  On the way back I had a chance to talk with Ben, Chris, Mark "carbon rims" Seaburg, and Dan Lockery as they were headed to the turn around.  Back to Birchwood I would find out my lead was roughly 50 minutes the 1st time through with Ben rolling in 2nd still.

Picture of Dan and Chris by Mark, shortly before the turnaround.

I left Birchwood (63 to go) with the feeling my stomach COULD go south on me, but at the same time the legs felt great.  I hammered the section from Birchwood to Winter with 2 goals in mind.  The race was far from won and if I encountered any problems, like a boo boo tummy, I wanted as much of a lead as possible.  Also, if I had problems, I wanted to have beat Ben mentally.  I wanted him to see an ever increasing lead that seemed impossible to bring back.  I did stop and chat with fellow of the 150 racers that were still making their way to Birchwood for the first time.  Sadly, none of them would make it the full 150.

About 10 miles before I got to Winter my stomach started tightening up.  Water was the only thing I could manage.  I rolled into Winter (30 to go) looking for soup, heavy on broth.  I was still in good spirits and those got picked up further when I found out I had about a 3 hour lead (Ben took close to a 2 hour detour) as of Birchwood (63 to go).  I would quickly discharge the soup into the toilet.  Oh well, only 30 to go and I had a kick ass lead.  I stayed longer than I needed hoping my stomach would get better, it didn't, and headed out about 9pm'ish armed with the only thing that sounded good to my boo boo tummy, a PB&J.

Taken by Sveta Kovalchuk, fellow racer as we stopped and chatted.  Taken 95ish miles in.

The wind really picked up and I threw on a windbreaker while alternating standing/sitting/walking as my stomach had a noose around it that only seemed to tighten and get worse and very painful.  With 10 to go I found a slight salvation in left over goodies from the 35 mile racers' pit stop.  I downed a bit of Sprite and that seemed to sit "alright" with the PB&J I had been working on the last 30 miles.  With 9 to go some crazy runner sleeping in the trail made me stop.  It was only Jason "Buff" Buffington taking a quick nap before he would go on to set the course record in the run (he holds the bike record as he speaks "stud" in many languages).  With 5 to go my stomach wasn't the only thing going haywire as I found a good spot to hide the what was coming out the other end now.  With 1 to go my stomach went nuts as it convulsed repeatedly all over the trail and I got to analyze the contents.  I figure that last 40 miles I held down about 1/2 a PB&J and roughly 10 ounces of Sprite.  It was a rough way to finish, especially considering my legs still felt strong.

Ben would get to Winter with 30 to go,a bit over 4 hours back, and end up dropping out of the race.  Dan would roll in about 6 hours after me for 2nd, Mark 30 minutes for 3rd.  Chris would venture in after a nap, finishing 4th.  And that ladies and gentleman is the entire list of finishers as the trail conditions got the best of everyone else.  The bike and run divisions had an exceptional amount of drops.

Recovery has been tough as the 2 days after all I could eat was Sprite/crackers and I my body was releasing as much as it could on both ends.  Try riding your bike for 20 hours and recover on that with a stomach bug, it sucks.

Now I ride shorter/easier rides, looking for my body to be 100% to hit up some long/hard rides before Arrowhead.  However, it is not that race that haunts my thought.  Iditarod is coming....