Off to see the wizard,,,

Be careful what you ask for on in the comments section of the blog. This little number with certificate will be delivered to one die hard fan of the blog. It is rumored he missed the birth of his daughter because he was checking the blog for a possible update. Again, just a rumor. 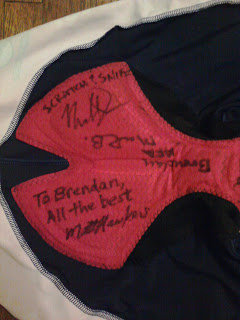 Afton last year VS. this year

Alright, so despite the fact he was the only reason my 24 hour race at Afton didn't go well, I am posting my support from last year (couldn't be MY fault). This is Nick, aka Curtis, aka YDB. He used to be a model. Yup, he was. That was his actual title. Sorry ladies, he is not available. He used to be in the coast guard as well. It was pretty much like Baywatch, but without Baywatch Nights. So there you go Nick, you're famous. 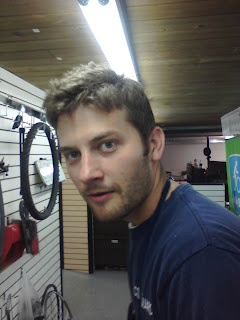 This is my support for this year. Meet Mark, aka ODB. He is a Father of three and is able to lift small cars. His hobbies include kicking butt as my support person at Afton and making fun of Nick (but so does everyone else). Feel free to stop by the tent and say "hi" to Mr. Barlow at the race. He doesn't bite too hard. 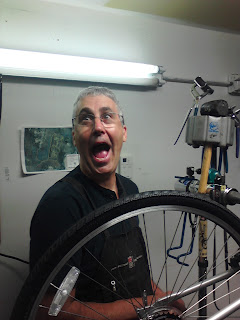 So that is that. Look for me to rock the Fisher bikes at the race, I hope to do them proud. Looking forward to suffering with my "Bring It On" costar.
Back to work. 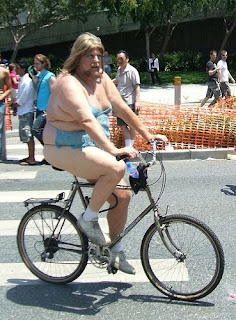 So as I take it easy on the bike this way it gives me a chance to reflect on how spiritual and enlightening a 24 hour race can be on the soul. I can see within myself and find the true meaning of my existence. I am sure I will find myself while racing for 24 hours this weekend.

Just kidding. It hurts. Right around 4 hours the suckiness starts to really set in and it is just a matter of will often times. Soul, schmoul. The only enlightenment I hope to see is the sunrise Sunday morning and my name being chanted through the hills of Afton.

Oh, and I am finding out that there will be a whole bunch of good competition. I am giddy with anticipation. I just hope Dan brings plenty of Mountain Dew. You hear me Dan? Yeah, you do. Like a spider monkey, a spider monkey.

Alright, my phone is not letting me download pics. Wrong format or something.

What there will be for other tough men? I have no idea. I just know what I can do. I am anxious for a good old fashioned Dan vs. Charly battle though. Dan is like Kirsten Dunst from"Bring It On" and I am his urban counter part Gabrielle Union. At first we'll hate each other, but then grow a mutual respect that ends in a long friendship.

So my loyal fan has probably missed me lately. I have a bunch of posts to catch up on, and I think I'll just work backwards.
Yesterday was the Great Hawk Chase race in Duluth. The course was fun, but I ended up with a fat DNF. I had many things not going my way that day which was fine, it happens. I was still set out to finish and see what transpired. What was happening was what occurred to me back in 24 hours of 9 mile in 2007 (and for the same reason). I could not hold down any liquids, at all. As I faded hard going into the third lap and realized I was losing more liquids then I was putting in I decided to not end my day the same as 9 mile(almost passing out on the side of the trail) as I have Afton (gasp!) next weekend. The plug was pulled, but the evacuation of contents took awhile to stop.
Just a couple of notes about the race. The registration/start area was really neat looking, with water flowing and such. The course was really fun, and I wished I was 100% and on the dually for the race. With all that though, I hope another MN race does not stop here. Parking was a nightmare. The park was well used by the neighbors so that only made it more crowded. The only viewing area to see the racers mid race was a mile up a hill (or a short walk as I was told, ha!). Had it been raining there would have only been one small shelter to hide under, but registration already was taking that up. I left frustrated as I was trying to negotiate a good spot for my wife, 2 year old (something to play with), and dog (away from the chaos of that playground) while I raced. There was none. This would be a fun place to ride, but not meant for a big race. Thanks, however, to those that made the race possible, and I hope you get spirit mountain back next year.
Oh, and a picture. The race started out with about a mile climb right away. Because I don't have a "series number" I get to line up in the back. Well, it took about 1/3 of the climb for there to be room to pass, but I was able to work my way up to about tenth before hitting the single track. Here is the back of the pack 10 seconds after the start. I believe that is me on the far left. 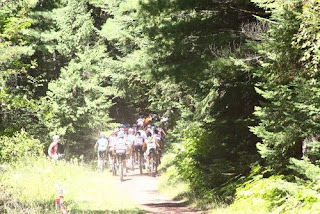 Picture obnoxiously stolen from Skinnyski.com, and probably taken by Jay Richards.
Oh, and expect to see a blog post a day for this week. Miss you all, and btw.

Posted by Charly Tri at 8:14 AM No comments:

It was a usual Monday at the bike shop until you called wanting to trade in your girlfriend's and your bikes. I anxiously awaited your expected arrival. When you came in later you asked for me and then I helped you grab your 2 Madone road bikes out of you 2 door older model Mercedes Kompressor. As Matt checked over the bikes in the back for value we talked about possibly a new Trek Speed Concept that these bikes could go towards. You fancied yourself quite the triathlete and proudly proclaimed your 9 hour time at Ironman WI the year before. As we talked at the counter the front door opened. You looked over for a second and back at me with a little worry in your eye. It was a fully clothed police officer.

And I, with pride and cockiness in my voice, said "Yep, he's here for you".

You see Paul, you know those bikes were stolen in Wabasha. I don't know if you did it or a friend. What you didn't know is that your victims had bought the bikes at our shop. So when you called about trading "your" bikes in I got your name and number. Then I convinced you to come in. When you walked through those doors I already knew that you were from Arkansaw, WI, ran track in high school, you were about 20 years old, and had in your possession 2 expensive probably stolen bikes. Google and being attentive to people calling can get lots of info.

Now, I don't know if people trusted you before. But when the officer told me that the cost of the bikes meant you would be charged with a felony, I figured it couldn't be good for your reputation. As I went home to enjoy my night with my daughter, you were handcuffed in the back of the police car on your way to jail. Funny how life is when you have to pay for your actions.

I guess what I am saying, Paul B., is don't steal bikes. Oh, and I found no result for you Ironman time. How could you have lied to me, I thought we had a lot of trust going on? Have fun dealing with the mess you created, you moron.

Hugs and Kisses,
Charly
Posted by Charly Tri at 8:28 AM 13 comments: