I don't run, but my wife does.

Think of all the work you could get done if you would not fool around on the internet and look at this blog. Oh well.

So, we headed down to Omaha so Becky could do her marathon. On the way down in Iowa we stopped at a Kum & Go convenience store (now is where I would insert a joke, but it would just too easy). This guy comes out of the store with a HUGE cup of soda. We get inside to see how big that sucker was...64 freaking ounces! There is 67 ounces in a 2 liter bottle of pop. That is ridiculous and sad. So, after Becky got her 64 oz filled with Pepsi and me with Mountain Dew, we were off again.

We can scratch Omaha as one our places we would live, but anywho. The race started at 7:00am on Sunday. I dropped Becky off at the start and then went back to the hotel to get the mountian bike so I could ride support. The first 12 miles of this course were nothing but 200 ft climbs. That is exceedingly difficult for a marathon runner. Half way in Becky was in the hurt hut and was getting stomach pains. I was trying my best to encorage her and motivate her. It was at mile 20 that she started choking back tears because of the pain. This would be her 4th marathon and I never saw her like this. Well, she would finish without walking any of the hills, and she would get a personnal record as well, 4 hours 10 minutes. This is very impresssive considering how hard the course was. Overall she finished in the top 1/4 of the women, and 4th in her age group. That is her best result ever, so we were pumped.

This is Becky in the red shirt at about mile 10. After this picture I pushed the dinosaur over. You should have heard that 15 year old boy inside crying for help! I suppose someone finally helped him up... 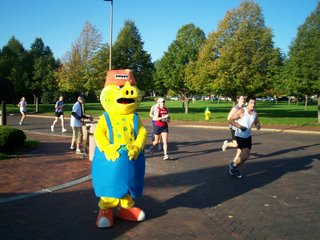 This guy was Crazy Leanord. He has Cerebal Palsy and his dad would run with him in marathons. Well, since his dad died others have been running with him. This was his 98th marathon. I thought of pushing him over too, but it somehow did not seem as funny. Maybe because he wasn't wearing a dinosaur costume. 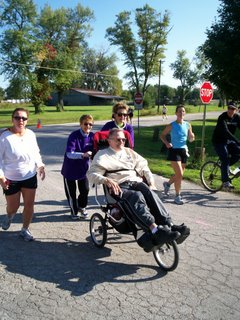 Holy Crap! 4:10 and all that pain?! I totally give her props! WAY-TO-GO Becky!!!! I can tell you that the hills in the Twin Cities are plenty for me and I was plenty glad to cross that finish line! Still waiting on belly pics, though. I updated mine :) Brendan is just too darn embarassed of his lack of belly.