My Ragnarok 105, the long version.

More pics to come when available.

I was fighting a cold leading to the race. Saturday morning I woke at 4:30am feeling like poo. Headache, sniffles, very tired from little sleep the night before. Took off from the house at 5:30am, STRONG coffee in hand, and with a stop in Zumbro Falls planned (the halfway point and where we would pick up our second set of directions). Dropped off a gallon jug of water and went to Red Wing to register. Crappy radio did not help how I was feeling, but then I started playing around with the CD changer that has sat used for months. Soon, I was jamming to some old school gangsta rap from Eazy-E (warning: lots of vulgarity) and feeling like an O.G.. Signed in, met the organisers, got the bike ready, chatted with fellow riders, and figured out what to wear. The valve on my front wheel was acting goofy, but seemed to be fine after I messed with it.

The Start, tale of woe, 105 miles to go: The start was conversational until Chris Skogen got to the front and drilled it. We all lined up behind and followed. Four miles into it we were about to start the first climb when I realized that I had almost no air left in the front tire thanks to a faulty valve. I sprinted clear of the group and pulled over to attempt my own Nascar pit stop. My original goal for the race was to try for a top placing. That had now changed. Now I wanted to work my tail off and see if I could make contact with the front group again, knowing full well it would hurt me the rest of the race. This was now a day for a super hard training effort. So off I went at a full on TT pace. Up the first hill, down the back, up the second hill, down the again, and onward to the third hill. During this time I was full on the gas, passing lots of riders, forearms on the tops of the bars whenever possible to go aero, out of breath, burning a lot of matches; ie. hurting. Up the third climb of the day I caught back onto the group after about 8 miles of chasing. We then went down a super sketchy minimum maintenance downhill that would have been tricky on a mountain bike. I struggled to get the body to drop down from 5th to 4th gear. It either wanted to keep going hard or super easy.

Back with the front, worked over: Well the legs were hurting. I tried to eye up those in the group that was about 12 strong. I am not good with identifying riders, but I knew that I needed to keep an eye on Charlie Farrow, Heath Weisbrod, Tim Ek, David Pramann, Larry Sauber, Brandt Elson, and local Jim Palmer based on how they were riding. We would continue on with some riders starting to fall off the back, Tim flatting, and about 3 riders sprinting for the remaining KOM points. I spent my time trying to recover from my earlier effort.

Leading the front group a few miles before the halfway point. Pic taken from here. 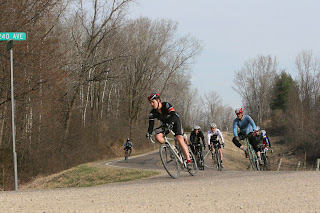 Halfway point, getting in a flow, 55miles to go: This was a race. It is never good to lose time, so I had my strategy going in to get our second half of notes and stocking up on supplies. Rolling towards Zumbro Falls with about 7 others, I removed my camelback and almost fully took off the cap. I rolled up to the checkpoint quickly so I could grab my notes early and not wait behind others. Grabbed my stashed jug, filled up the camelback, stashed the arm warmers and empty gel flasks, reloaded the directions in the map case, and off I went. It seemed only Charlie Farrow was quicker with the transition and the others were still messing around. Charlie waited up for me and we started out our own 2 man TT; 30 second pulls, look back for riders, and hope not to see anyone.

Second half, a good way to end a race: We could see 2 riders way back at one point before we descended into Millville. We kept up our TT action and built on what we hoped was the race winning break. Twenty five miles into the second half, I thought that Charlie may be struggling a little. This was confirmed when I had a 20 foot gap at the top of a medium sized hill. We were high up at that point and had a full on headwind. Despite not wanting to solo it for what would be roughly 30 miles, there were perfect conditions to escape. So instead of waiting up I stayed on the gas, hoping to build a gap. It worked. Rolling through Lake City I could not see Charlie. A wrong turn (completely my fault) saw me lose a couple of minutes leaving Lake City, but still ahead. That last 30 miles were spent going as fast as I could considering my previous efforts and all of the climbing. I was very worried about another flat as I only had a patch kit left, and no tube. Steep uphill sections were starting to really hurt, but I could manage fine on everything else. With 10 miles left I rolled past Deb Carson's house and got to yell out to her as she enjoyed the day out on her porch. I knew the area was extremely hilly still and figured there was at least 1 big climb left, probably 2. Sure enough with 5 to go I could see the second climb. The route had one last kick in the pants left, and the last 150 meters of that climb were very, very steep. I had not touched the one bottle I had all day, so I dumped it at the bottom of the climb to get me that extra 1/4 of a second over the rise. No doubt many would walk on that last section. Down the next hill and into Red Wing I rolled. Anyone in town at that time would have seen a smiling idiot rolling by on his way to Colville Park for the win.

The equipment, cause you asked:
This year I am riding for the 29er Crew (and Velorochester still) on Gary Fisher bikes. So the for the race I chose my Gary Fisher cyclocross bike. I have people try to tell me that this is actually a Trek XO-2 with the downtube poorly relabeled as a Gary Fisher. Not sure where they get that from as you can clearly see in the pictures it is obviously not relabeled. Either way, both bikes are awesome. The Bontrager parts throughout worked top notch and those Race X-lite wheels stayed true from the day I built the bike. Front gearing was a 39/53 combo. Rear was a custom tuned 12-30 cassette. Rubber for the day was the Michelin Jet tire. Though it is labeled as a 30c, it measures as wide as everyone else's 35c tire. Rolls very fast. The one caveat with that tire is that is has little traction, so those without much experience (like off road riding) may lose traction some when standing on climbs and certain corners. I had no problems. 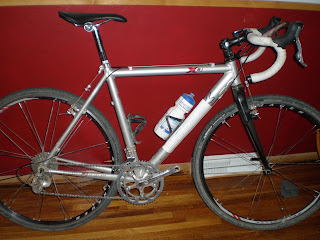 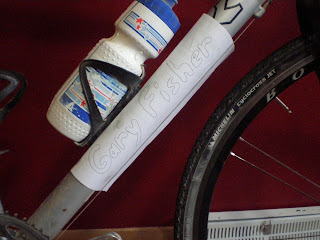 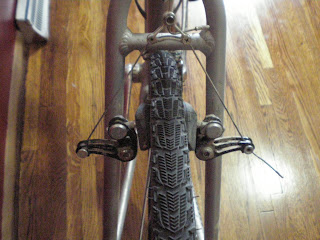 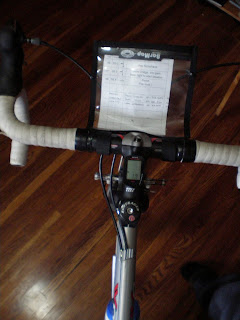 Hope to have more pics as they become available.

Notes:
-Took in about 1800 calories only from EFS shot gel.
-Drank roughly 100-120 ounces of water.
-Finished in 6 hours and 6 minutes.
-Average of about 17.2 mph (that is with flat repair and course deviation)
-So far I have not gotten sicker, which is not what I expected.
-Yeah, and you should work now.
Posted by Charly Tri at 8:26 AM

Ummn yeah, it's not cause of your comments about my pretty bike I've been spying your site. Nice race! If RAG was a sick performance, what's your sick performance? Maybe see you at Salem, again, on that bike. :)

BTW, good job on the SS win and crushing it for KOM points.

Bravo Mr. Tri...Letz work together in Iowa to beat the Neo-Cons, the Maoists, and the rest of the riff-raff...
Charlie