Time for some math. I have a cabin in Cable, WI. There is a super fun race the weekend of May 16/17th and sweet trails to ride after. There is also a fairly lame MN series race course that weekend. Add it up and you get much of the Velo team headed up to Cable for the weekend for racing, riding, and smack talking.


The Race-CORC (Cable Off-Road Classic)
Friday night most of us got a ride in. Saturday morning was chilly. With temps not even hitting 40 degrees, the youth of the team rolled out for the 5 mile warm up to Lakewoods lodge. Once there I separated myself and did everything I could do to warm up the body. My legs were telling me that it was not to be a good day. The cold I have been fighting the last week was making it's presence known as well.

The national anthem ends and Gary Crandel calls out 3 seconds to start. We assumed he meant 30 seconds until the gun fired right after. I was standing next to my bike so I hopped on and played catch up. Through the rock lake single track and back out on the road I found myself right near or at the front. TJ Woodruff took off hard and shortly later a guy that I would find out is Dan Schuetz took off as well with no one chasing. There was a group of 15 or so, but I could only pick out a few riders while we rolled along at high speed; Matt Kurke (VR teammate), Chris Fisher (VR teammate), Sam Oftedahl (Super nice guy), and Hollywood (Party On!). Matt, Hollywood, and I were doing the bulk of the work, with me coughing a lot from my cold. I started to get annoyed that after awhile I found myself on the front more and more without help, so I tried little surges, not attacks, to break up the group and soften others for later in the race. I figured I would fade at some point and Matt and Chris could take advantage of my work.

The speeds were very fast, the temp still wasn't above 40, and we were rolling straight through the abundant amount of puddles. Needless to say there were some very cold and wet feet out there!

Luckily I had ridden the 4 wheeler trail we were on at the time and knew we were about to turn on to the Esker's single track. I rolled into the corner first and kept the pace up. Hollywood was behind me and I knew his fully rigid 29'er couldn't motor through the rough stuff like my Hi Fi, so I layed on the gas. Out of the Esker I found myself off the front of the group with Matt and Sam. Some chain suck on a hill and they had a small gap on me. I was now rolling in 5th and pleased as punch with my standing on the course.

The Ojibwe trail was next, tight and twisty single track. Right before that I could see Matt catch and pass Dan who had been away for awhile. For several miles I rode with the mindset of keeping Sam, the 2008 MN state series champ, in my sights. Shortly before the end of the trail Sam got by Dan as well and Matt was getting harder to see. I too got behind Dan and I think he was really suffering on the trail with his small wheeled hardtail. I lost some time getting around him, and I thought Sam and Matt were gone for good.

The last 5 miles are wide open and when I popped out I saw Sam was not far up. Now Sam has amazing power to weight, but I have not seen his numbers on the bathroom scale since I was 12. On the flats I can look like the tough guy. I caught him quickly and he let me know that he was content sitting on for a long while. Now Sam could be holding a large Labrador Retriever and I would still throw up bigger numbers when weighed, so I was not worried about him for the sprint. That, and I know a guy like Sam is way to nice to let me do the bulk of the work only to come by at the end.

I layed on the gas in hopes of catching Matt (who I only assumed could also out kick Sam in the sprint), and holding off Dan. No disrespect to Sam, because on a course like Afton he could be eating a sub, texting his Dad, and still pull away from me easily on the climbs. We all have our strengths. I could see TJ a ways up on Matt as well. Matt's gap started to come down and it looked possible, until he saw me back there and dug deep to open it up again. The last little bit I slowed down knowing that my Matt was gone for good and Dan was not catching us. Sam impressed me a lot by offering to lead me out and I came by him for 3rd place. I forgot to thank him afterwards so hopefully he reads this. Truly a classy guy.

This is the best placing I have ever done in a larger race so I was stoked! Third place and just in the money! I also beat some very strong guys and was only 90 seconds back of a well seasoned pro. Full results here.

Saturday Night Ride
The young'ns got out that night for a fun night ride on the Ojibwe. Super fun singletrack is only made better in the dark. 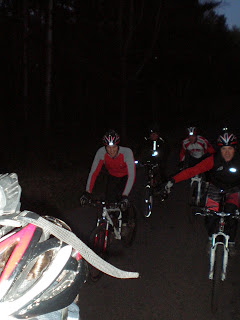 On our way to singletrack bliss. 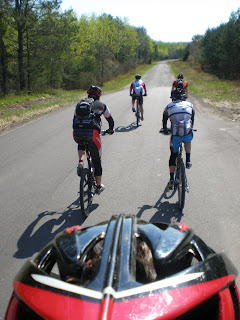 Sunday was spent riding for close to 4 hours in the Rock Lake system. We ran into the old guys and got a picture. 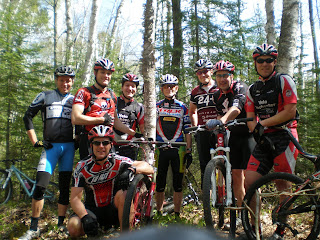 There is a new section of singletrack being built at Rock Lake that we rode by accident on Sunday. We hit again Sunday and stopped a wild rock chute. This is a good sized chute with some small drops and all rock. It is intimidating.

We decided to do a quick instructional video. This is Matt Kurke demonstrating how not to ride this section. Don't worry, Matt was wearing a helmet so there was no chance of injury. Sorry, but you'll have to tilt your head as I can't figure out how to turn the video.

And this is Jason Wenk showing proper form. (May want to watch the volume if watching in public.)

Then we came home. Lots of riding on our legs and big smiles.

Harmon Park backwards was actually a pretty cool course. The feedback from the racers this year was much more positive and the racing action was pretty hot. Just given the speeds, it was very technically demanding.
I am disappointed that I missed the training camp, but I am glad I stayed home to race.
I heard the singletrack up there was minimal from Jay and crew...bummer.

I hope to make it one of these times. Count me in the old guy category.