12 Hours of the Northern Kettles.

Not sure, but I think may race recaps are wordy, so I'll try to shorten this up. Just thought I'd say "hey" to the new people I met this weekend as well. Thanks for reading.

Prerace
I showed to the race plenty early and there was not a sign of rain. Weather report said 30% chance until 9am and then 0% after that, so the mud tires were left to rest back in MN. Chatted with the main competition; the Chris's. Chris Strout was fresh off his first 12 hour win 2 weeks before and was sporting the latest SRAM goodies, complete with electrical tape. Chris Schotz was running self supported like myself.

The Start
The race course was described as 6-7 miles of single track with no passing. With that I put in a big effort to get to the trail first so that there was no chance of me being held up. Looking back I could see C. Strout about 10 seconds back. The course was incredibly rough and his 69'er Siren softail could not have been as smooth as my Gary Fisher Hi-Fi, so I figured I was buying my time until the bumps and rocks started to get to him. Sure enough towards the end of lap 3 I lost sight of him and continued on my way. I rode for awhile, lapping riders, and finishing off laps in the mid to high 30 minute range. I saw C. Schotz when the course almost overlapped on itself and knew he was about 4-5 minutes back.

Crash and Burn.
Soon the course roughness seemed to numb the body and the bumps felt smaller. Now the course is really rough, new, rocky, and constantly changing pitch. You could never stay in a gear long or settle into any sort of groove. Three hours in, on a longer downhill towards the end of the lap, a bug flew into my "good" eye, causing me to go off trail enough to hit a stump and fly over the handlebars at a high rate of speed (Think Matt's video below, only the speed was higher). I heard an explosion and thought that such a hard impact was a race ender. I got up, checked the bike, and got going. Sometimes the body feels better if you start riding right away. Well, my left shoulder and hip were in a lot of pain, as well as my head, and my stomach was now nausueas and I was light headed. With the dripping down my leg I figured the Camelback exploded. I took a timeout at the pits to refill the Camelbacks and make sure that I was safe to go out again. Turns the explosion and dripping were my exploded gel flask. Soon, C. Schotz came by and I was sure that C. Strout would be there too. So I headed out, covered in gel, hoping not to lose too much time. The injuries were bothering me and I was still light headed, so I pulled over and sat on a log to keep from crashing again. Then I went back to the pits to sit as well ans see if I could get myself back in the race. A time out, new shorts, and sleeveless jersey had me going again, but I was definitely beat up.

Sometime before the crash and rainfall. Note the race number. 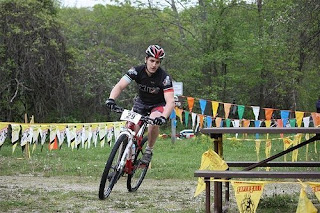 The Comeback? (not sure what is up with the text size)
I put in 3 or 4 good fast laps when it started to rain. The prospect of rain made me happy as I thought I would do even better with a muddy course. I got in a half lap and it was getting slick already. I went out for another lap and all rear tire traction was gone. The Bontrager XR-1 (my rear tire choice) was amazing in the dry, but possibly the worst tire for the mud. Every corner had my rear wheel slide out. Most climbs I had to walk, and everything else was a chore. I had person after person passing me and the temps went down. My sleeveless jersey was now a liability as I was freezing as well. That and the fact I was nursing my body from the crash had me convinced that if I ever finished the lap I would be done. I was having no fun that day. My last lap out there would take my 1 hour 20 minutes, 2 1/2 times longer then my other laps. I managed 8 hours out there full of frustrations on the day.

I ended the day in 7th, thanks to the fact half of the other solo field dropped as well. Could have gone better. The next day my hip was alright, but the shoulder was hurting.

Looks like I was wordy, saw about that. Hope your boss understands.

Hey, way to stick it out and get back out there to at least give it a try. We wussed. That humidity snuck up on me -- I had to back down and hope you'd pay for the early effort. I still don't know how Schotz was so close after we beat up on each other the first 3 laps! You guys and your four inches ...

Dude, I would have been hurting without all the cush for my tush. I knew Chris would not be far back, he never is. Good luck in Big Bear and hope to finish our battle another day :)

Dude, that sucks. I hope you feel better. I saw the results and was waiting for your report. Your laps/overall time was pretty impressive.

Sometimes the studliest guy has to give up a few wins...when are we adding the "Ask Becky" column???

It was nice meeting you this past weekend. At least I didn't take ya out when I catapulted over my bike.

I cannot believe you did not mention your wife's killer marathon! It's all about you...