Fatbikefest was this last weekend in Elk River. I guess the best way to describe it would be the MN state championship race, only on snow and ginormous tires.

Elk River is foreign to me, so as Kuske and I rolled in my eyes met new sites. A drive down a narrow road opens up to the parking lot complete with large firepit, registration, and the coolest podium I have ever seen (cut into a giant snow bank).

We has just shown up and they announced the BullMoto race. It was free and I needed to warm up the lungs so I joined in. Slipping and sliding around I was just able to avoid getting girled, ending I think 2nd overall. It was all in fun.

The big race was soon after. My breathing was suspect so for precation I threw on my new breathing mask. Two laps around the BullMoto run and off on the trails. The race would represent several "firsts" for me since about October. The first time I rode with a front brake, first time getting in the "red zone", first time using my new mask, and first time riding anything remotely close to singletrack. I would hit the trail in 4th place, I think. After a few miles I started getting the hang of how Elk River winter racing is done, OUTSIDE on those icy corners, grrrrr. I would start to get in a flow. The shifting under tension showed the weakness of my thumbshifter and skipping shifts and a chain in the spokes became common and frustrating. By the end of the first of 2 big laps I learned how to ride the trail and not to shift in the 34 in the back. Somewhere out there my lungs would finally open up and I removed the mask.

With my bike problems I would move back and work my way up. By the end of the first lap I had things figured out and had worked my way up to 3rd after a little push from Larry "Pipes" Sauber, right behind Heath "Pretty Bike" Weisbrod and a healthy distance behind Brendan "KC" Moore. Near the beginning of the second lap Heath took a "b" line over some ladders, which I think was his way of letting me pass, thanks Heath.

I finished out the lap for 2nd. I didn't exactly come into this race knowing much except the date and probably time on the trail. It was nice to get "in the money" considering I didn't know money was even an option on the way up. A super cool "check" some t-shirts, and a new wireless computer later and I was leaving with every intention of making it back to future races. Rich knows how to make a fun event.

Below is my super sweet 907 with my Arrowhead bags (not used in the race). This looked like a smaller version of Hollywood's bike that came in 3rd, and Brendan's 907 in first. What is that you say, the 907's took the top 3 spots? Well yes, yes they did. 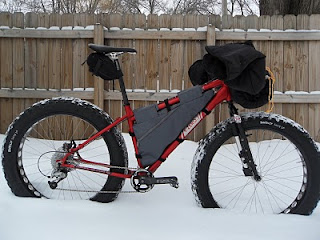 Quite possibly the coolest 2 year old ever holding one of the coolest awards I have ever received. Yes, the shirt speaks the truth. 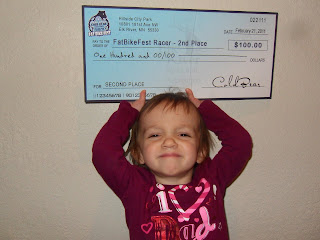 A couple of videos of the race scene. Note the 4 riders lining up were for the final run of the BullMoto race. That is me on the far left.


I be the guy in the mask at the start.

You and jimmmmay lined up together. Man crush? ha. Your harddrive point on jimmmay will go down in the annals of lcr lies and inu-endos.

Pipes? You getting me mixed up with my brother.