Alright, so this is my Levis 100 recap post. First to finish off where I left off before. Cable was f'ing fun. Long rides epic rides, ton of family time, and more bear encounters than I think I can list. I was within 30 yards (or closer) of black bears more times than I care for with nothing but my clothes separating me and them. Tons of fun.

So Levis in chapters with alternative ending and smack talk for WORS racers!!

Prerace
No surprise racers arrived to compete with, unfortunately. The main adversary would be the heat for everyone. Low 90's, mid 90% humidity equaled a long day and tons of DNF's. We were scheduled to race 7 laps on a revised loop that was about 15 miles long. The course had MORE climbing and was much MORE technical in nature than the year before. This is a real mountain biker's course (which is why I like it so much)! We would be riding some super narrow technical trails with 60 degree drops on one side, crazy! I would be self supported, just as were the racers I wanted to watch for (Tim Ek and Dan Dittmer). It was too hot for my darling Abi :( and thus my smoking hot wife. 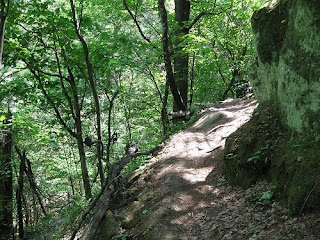 Race Time
We all took off on the Leman's start. I was second to the bike and first in the singletrack. The legs were clicking over quickly and I was soon out of sight. The first lap felt good, I got my goodies in the pit, and was off for the 2nd lap without seeing anyone else yet. This would continue until I finished off the 4th lap. The heat/humidity were making things MISERABLE and I needed to cool off. While my body went into shock from the ice cold bottles I poured on myself I found out how things were going. Turns out I was 30 minutes up on 2nd (Ek) and 35 minutes on 3rd (Dittmer) after the 3rd lap. I was consistently gaining 10 minutes per lap on my rivals!

Well, the 5th and 6th lap went as well as they could with the body wearing hard from the heat. I finished up my 6th lap at 6pm with about an hour's lead on 2nd (Ek still, Dittmer dropped from the heat) and leading ALL the other 100 miler categories. I knew the WEMS races had a time cut off of 8pm and that I would be the only one who could complete the 7th lap. I decided to pack up and head home early proud off my 3rd straight victory at this tough man competition.

Wait, there's more with a surprise
ALTERNATIVE ENDING!!
So it was 7pm. I was washed up. Most of my stuff was packed in the car. I just needed to breakdown the tent and throw the bikes on the car. That is when Jason the race director informed we that 3rd place had gone out for a 7th lap (Ek stopped at 6 laps). "Why", I said, "he'll never make it back before 8pm". "Oh, no", was the reply, "we had extended the cutoff to 9pm". After several minutes of trying to figure out if he was serious I had flipped the switch from 'I'm hungry and about to get in the car to go home', to 'I am not letting this SOB sneak by me for the win'. Like Superman I jumped into my tent and quickly emerged with my sweat soaked kit on. A volunteer had grabbed bottles and gel from my car and after chugging Jason's Powerade I was off like a prom dress. I caught my now arch enemy (I am bad with names, Karl?. His last name was Bachelor) about 1/4 into the course. We talked briefly and realized that he just needed to finish out the lap to move up to second and I needed to beat him in for 1st. I would have continued with him, but fear of the unforeseen mechanical and the worry of a bonk pushed me forward. I ended up 10 minutes in front of Karl??(nice guy) for the win (again). I posted a sub 1:30 lap my last lap which is impressive considering it was close to my fastest lap. Results will be linked here when available.

Impressions
So I am the 3 time winner of the Levis 100. My goal next year is to get you WORS hotshots out there. Seriously, are you going to let some guy from MN come over and take your best race (Well LaCrosse is the bomb as well) in the series again next year? So this is my promise. I am going to goat you guys into showing up. I don't care if I have to talk smack on your precious WORS forum. I want to see guys show up that are going to make everyone crap their pants with excitement. Bring me your best WI. The Wems races are scheduled around your series, so get your butts off the couch that weekend and try to kick my 10,000 lakes loving rear end you smelly cheeseheads. See you in 2011:)

Oh, and the Superfly 100 is simply the BEST bike that I have ever ridden. No contest.
Posted by Charly Tri at 8:29 PM

Excellent race and nice hangin' out with you again.

Nice work Tri.
The superfly 100 is only the best bike because you haven't ridden a top fuel.

Great job Charly! You almost became the real deal "Sally" hanging it up on 6...haha! Ride on man...

Is that a Trek?

Great seeing you again!!! To be honest....I am worried that you have lost too much weight!!
Hugs,
Charlie

Good race, Charly! I've never hurt as bad as the last lap of that race and I only did four.