Note:I'll add more pictures as I find them.

For the last two years I watched riders cross Elephant Lake to reach the halfway point of the Arrowhead Ultra 135 mile winter race. I watched in jealousy as bouts of asthma had me watching from the sidelines, so as I turned my phenomenal 907 bike to go onto Elephant Lake this year I gave no prior thought when I yelled "F*&^ Yeah!" doing my best Jersey Shore fist pump. I was high on life at that point because reaching this point was my sign that this was the year. (Unlike 2010 and 2011)

(picture from a previous year)

Our 7am start was off to a blazing start as Jay Petervary took off like a scared rabbit with 2 or 3 riders in tow. A large second group formed and a hard pace was set. I took note that my body did not feel up for the challenge quite yet, but lungs were better than the past 2 years. Doom, Dittmer, and Jensen seemed to push it the hardest in the group. A soft section would ramp up the breathing, so back I dropped to get control. Farrow would fall back as well. Soon I was going good again into the 1st check point. I was surprised to see the group I was with but also Group Petervary returning from the out and back. Three and a half hours in, 100 miles left.

(The start thanks to Allison Long)

On I went, picking up Josh "I never met a Bette Midler song I didn't like" Peterson. As the trail become hillier I would see three more riders not far up. I thought about working hard to chase'm down, but the lungs would flare up every now and then, causing me to slow way down or completely stop. Eventually I would catch Francis Lambert, passing him before the 1/2 way point; reaching the cabin in 7th place. The cabin would hold a departing Dittmer, a dejected Jensen (mechanical), and Doom. I was in and out in 7 minutes having filled the camelback, drank a glass of pop, and downed some bean soup. Doom and I would depart together, Lambert soon after I guess. Eight hours in, 65 miles left. 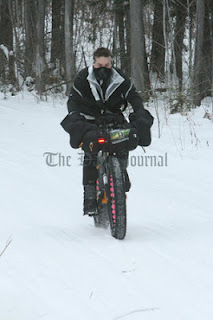 There are some good sized hills soon after that 2nd checkpoint, Doom and I would talk some and yo-yo some. It was when my lungs went nuts and I completely stopped that he left me for good. Lambert would soon pass as well for the same reason. After a flat section of trail we came to the nasty stuff just as the sun went down for the night. I heard stories, but until you are out there trying to push nearly 50 pounds of bike/gear up crazy steep hills over and over again for hours in soft snow you cannot appreciate the effort. On these hike-a-bike sections again my breathing went absolutely crazy. I had a hard time with every aspect of this part of the course and expected 8th place to roll up on me. Almost 6 hours later I found the Teepee that marked the last checkpoint. A quick downing of a bunch of cocoa/cappachino mix from Whizanator and friends and I was off like a rocket. Fourteen hours in, 24 miles left.

The majority of the last section of the course is fairly flat and I was going great, lungs and all. I heard that Lambert was 15 minutes up on me at the Tee Pee and it was not long before I would surprisingly see his blinky light. I continued my strong pace and opened up a gap. My lead over Lambert was several minutes when the lungs decided to mess with me one last time. I would stop briefly twice, get going, and still had a gap. Then I got dizzy, weak, and needed to stop. Lambert checked on me as I stood there dizzy, but I just needed to work it out. He continued at my insistence, stopped a 1/4 mile later to look back and make sure I was still upright and rode on. He let me know we had 2 1/2 miles left at that point.

I would finish 10 minutes behind Lambert for 7th place (just shy of 17.5 hours) after being 5 minutes up with 2 1/2 miles left. Because of just one of my many flare ups out there I lost at least 15 minutes, so yeah, to only be 92 minutes behind the leaders has me happy not just with finishing, but with how well I did, and I FINALLY FREAKING FINISHED ARROWHEAD!! F(&^ YEAH!!!!!!

Notes:
-The bike was awesome and awe inspiring.
-I firmly believe that I was able to minimize and control my flare ups because of the Cold Avenger that covered my face the entire time I wasn't shoving food down the gullet. THANK YOU GUYS!!
-I saw a ton of wolf tracks in the inch or so of snow the area received the night before.
-J-No's race ended early, I'll let him explain, but it involved a horse, motor oil, and a human sized doll of the Cat in the Hat.
-I have already been planning for next year to make me faster. I am hoping to maximize my strengths and minimize the weaknesses.
-I learned a few lessons about gear set up, nothing that cost time, but my many skin abrasions will stick with me for a few days.
-The little snow up there made for a much less spectacular looking race, oh, and much bumpier course.
-There is nothing not to like about this event. Hard course, great organization/volunteers/fellow racers/course markings/etc.
-You can make a drinking game out of this blog post. Reread it, and everytime I mention my lungs or breathing take a drink. Seriously though, I focused more on my ability to breath more than following the right line, my competition, the cold (or lack of), the pain in my body, or even the sleet hitting me at the end.
Posted by Charly Tri at 5:24 PM

Congratulations!!!!!!!!!
I am very proud of you. Being an Asthmatic myself I know what hell you went through. Good Job.
Ari Andonopoulos

Nice! I kept watching your name show up in the results at each checkpoint.

Congrats on the great race!

Awesome effort. I have trouble breathing at the Arrowhead without asthma so I can only imagine.
I think I prefer Boom to Doom!

Ben, funny I guess I am still pretty tired. I'll fix later, but either way you rode strong out there, good job.

Congratulations Charly. Well deserved finish and a placing to be proud of.

Congrats Charly! Great race and super strong finish. You completely killed the last bit of mental strength I had left when you passed me so fast in the last section.
Francis Lambert

Way to kill that monkey

Great effort Charly....Bravo Old Boy and I say "Sucks to your Asmar" :)
Hugs,
the older Charlie

That was absolutely intense!

Yeah, spank the MONKEY!
proud of you Charly....dave p

I have a question about the cold mask you are wearing. Someone directed me to you because it seems you have beaten the cold exercise induced asthma. I am a nordic ski racer and have horrible trouble with it even using an inhaler and a mask over my face. Does the cold avenger really work? I saw a lot of reviews that it doesnt. I don't care about wearing goggles or glasses, just being able to breathe in a deep breath so I can continue to ski. Some people also said it limits the air intake, have you noticed that?