My day on the Tuscobia Trail

As I looked out on the trail with my headlamp, the frost crystals that had formed on every little twig would sparkle and change like they were paparazzi cameras flashing and I was Britney Spears going commando. It was quiet, very quiet; and late, just not sure how late. And plenty dark except for my little headlamp, the brilliant half moon, and bright stars.

Well, earlier that day I set out on the Tuscobia 150 race with fellow idiots looking for a challenge. The night before was our prerace gathering and it seemed with only a month to prepare, these new race organizers sure were on the ball. While it was still dark, us bikers, the odd skiers, and even more odd ball runners pushed off from Park Falls 6am that morning. The goal would be to ride 75 miles on the Tuscobia Trail, turn around, and do it all over again. Mandatory 2 stops in each direction and minimum gear requirements were there to keep us safe. The trail itself was mostly snow covered, but not enough for grooming or much traffic, making conditions tough and rutted. Add in the warm temps leading to the start, there was not much of a hard surface.

J-No, Charlie Farrow, and I spent the night before snuggled in a motel room and we now led the start. Absent were last year's big pace setters Big Buff (gone crazy and is training for running) and Lance Andre (rumored to be wind tunnel testing his newest fatbike set up). After a mile or few I squeezed to the front on our rutted portion of course. Soon I would notice that there was no light casting a shadow behind me. I figured those two had dropped back just a few feet. Quickly, we would approach the most annoying 20 mile section of trail. There was about 3 inches of snow with a shallow hard crust and soft snow beneath. To bust through the crust meant dramatically harder riding. I was almost rimming out the Flattop 80 rims in order to maintain a moderate amount of float over said crust. I knew Farrow and Novak were probably having a harder time as their rims were not as robust, nor their tires as "big and fat". I did not see them when I stopped to air out the sweet 907 bike.

Into the first checkpoint at mile 30 (4 hours in), a quick grab of peanut M&M's, a pump of the tires, and I was off. The checkpoints were just off course in motel rooms, and I had yet to see anyone else when I hopped back on the trail. The course just before that and most of the rest of the way had some traffic at points, so the tires were allowed to remain semi hard unlike the slog most of the way to the first checkpoint.

Well, onto the 2nd checkpoint and there was a bridge out. After following "the official" trail reroute to dead ends and false leads for roughly 30 minutes, I just forced my way onto the trail and soon found why there was confusion from our instructions and what we found. Novak and Farrow would end up following my tracks to the same dead ends, so I guess it was no real hindrance. Just before CP #2 I ran into one of the many great volunteers, Lisa. I was told that my lead was somewhere in excess of 5 miles, and I let her know about the bridge out problem. She took this pic as I approached, trying to ride within the lines.

Into the CP #2 (8 hours, and 65 mile in), a fill up of the Camelback, a handful of peanut M&M's, an act of war against the toilet bowl that had been brewing since the start, and I was out in 10 minutes. I would learn that my lead at CP #1 was 30 minutes. Londell the volunteer there would snap this picture of my departure back to the trail.

From there to the turn around and back the trail was only about 2/3 covered with snow, and the fastest section. I would get to the turn around and then started counting mile markers (no computer for me) until I reached 2nd place J-No just past mile marker 8, thus 16 miles in the lead. We stopped and talked about the bridge and Farrow's absence. A few miles later Farrow would talk of bad seatpost and chain when we crossed paths. I would stop into CP#3(which is the same as CP#2) 11 hours and 75 miles into the race and find I had been 90 minutes up when the others passed through. I was in and out with my M&M's and back on the trail in just a few moments and in time to watch the sun set for the night.

The trail to the last checkpoint went well for the first 10 miles, then the next 25 were a downhill slide as the length of the race and the time of day would get catch up with me. I would stop and chat with the rest of the bikers and witness the 3 runners left in the race. The CP#4 would finally arrive 120 miles and 15 1/2 hours in and the thought of the beef stew had haunted me long before arrival. The latest update was I had almost a 3 hour lead into CP#3. Armed with this info I sat and consumed stew, M&M's, chips, pop, and coffee. I felt pretty miserable and tired as it had been about 16 hours of riding in not so great conditions. After about 45 minutes of chilling I realized it wasn't going to get easy, so I figured since I was in the lead I should act like it.

Back on the bike and I felt much better for awhile. Shivering for the first 10 minutes I headed towards Park Falls, hoping for better trail then what we encountered at the start. Soon I would find things in a miserable mess. The trail was now badly rutted from runners and walking bikers and fresh snow mobile tracks were very soft. I spent about 20 miles fighting the trail. Lisa would catch back up with me at about midnight as I walked for a bit to ease the constant beating the trail dished out. She walked with me for a few minutes as I vented about how tough that section of trail was. Anyways, the frost crystals on the trees, bushes, my bags glistened brilliantly. The stars were big and bright, the half moon glowed.

Slowly, I would arrive where I started, almost 22 hours later. The finish was lit with candles... 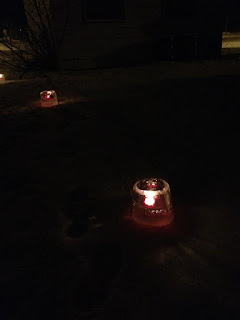 ....and a lit finish line. Probably the coolest finish I have ever seen. 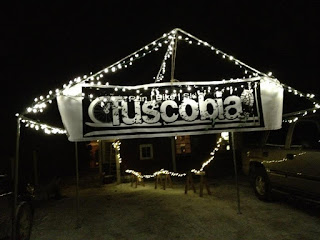 Lisa met me at the finish, Greg, the owner of the Chequamegon Canoe Club (our start and finish) was fantastic in helping with whatever my heart desired. In fact, the CCC really rolled out the red carpet for the racers. A shower and a nap, then waiting for the arrival of Farrow in second and the details on J-No's DNF.

The trophy. I have a cute picture of the girls holding the trophy and prize (locally made maple syrup), but I can't find the cord to transfer the picture. 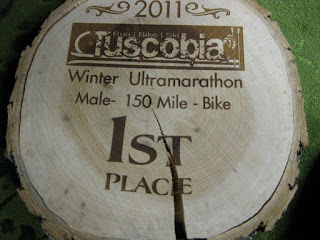 First and second place. Gotta love Farrow, combined with J-No we had a lot of fun. 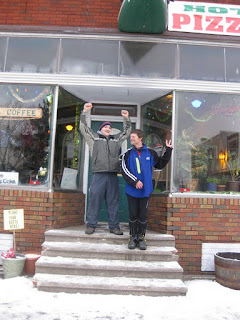 Great job you crazy biker! Thanks for letting us know about the bridge issues - we were able to straighten it out a bit. Hope at the end of the day you can look back on the brutal trail conditions with some satisfaction that you got the last laugh on the trail. Great having you at Tuscobia and good luck next month!
Chris

Nice work out there on the trail. Fun to chat along the trail (next time I will bundle up better, grab the headlamp, and stay out there a bit longer).

You are as impressive as you are humble. It was a tough ride this year, but you made it look like an easy one! Congrats, and can't wait to see you kick some butt at the AH 135.