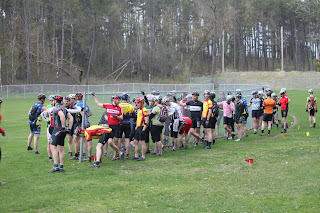 Alright, we are finally catching up on my racing career as of late. The last/first race in this catch up is the Sandwich 50. I along with Matt "Kuske" Kurke (defending champ) organised this race for the second year. This year we declared it the MN Enduro Championship. Seven laps on world class Eastwood Park singletrack. 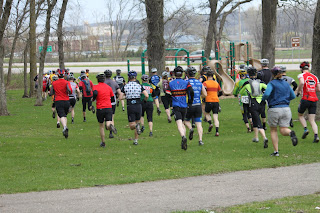 And away we go!
Leading up to the race I had felt like poo and that would carry forward through the race. Lack of sleep and upper back problems had been kicking my butt for several weeks. Matt was fighting a bad cold, but was anxious to show McDonald's why they are sponsoring his 2011 racing. Brendan Moore, the bad boy of biking, was set to appear as well. This was always in question after what happened last year. 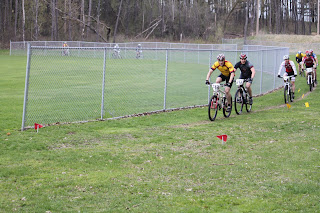 Micky D's Rider Kuske at the front of the prologue. I am rolling it in second.

The Le mans start was fun and somehow I got the "holeshot" into the singletrack, take that B. Moore! I felt like poo, but I forced my body through the paces of the first few laps, hoping it would come around. Matt and Brendan would sit in my draft, soaking up the benefit, refusing to pull. I guess some people don't believe in fair play and would rather play race tactics. Kaleb Himli and Jon "I raced the first world's and know Adam Craig" Finoff would trail about 30 seconds off our pace. At the beginning of the second lap Brendan would finally stop sucking wheel and pull through. His constant drafting had left him fresh as a daisy and he established a gap that would only grow through the day, no thanks to all my hard work on the first lap. 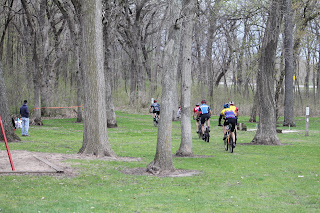 On the third lap Matt would pull out the old "mechanical" excuse and Jon Finoff would drop due to back problems. I would slow my pace, monitoring my gap to Kaleb all the way. I only felt worse during the race, but my pace was enough to hold off Kaleb for second place. 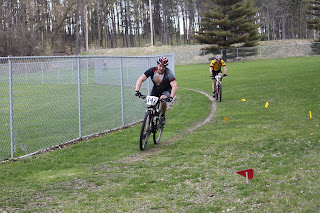 How far they have fallen. Here I pull in for the finish, and Micky D's rider Kuske heads out for another 2 laps.

So there you go, I was second for the second year in a row. If for some reason "BB" Brendan can not fulfill his obligations as the 2011 MN Enduro Mountain Bike State Champion, then I will be here to step in and hold the crown.

OH! I would be remiss if I didn't mention the Hobo Camp. Last year 2 homeless guys appeared, handing out bacon and beverages to the racers in the middle of the woods. Because of the economy, there were close to ten guys out there this year doing the same, cheering with much voracity. I would stop for a bacon hand up on the last lap, coughing up some charred bits 10 minutes later on that same lap. They were a HOOT and made the race that much more fun.
Posted by Charly Tri at 11:36 PM

Email ThisBlogThis!Share to TwitterShare to FacebookShare to Pinterest
Labels: sandwich 50

Really interesting topic and i like these pic because i love cycling.,

Great blog really enjoyed reading it. Have bookmarked you and will check back regular. Please feel free to take a look at my blog...
Dubai Holiday Packages
Cheap Dubai Holidays
Dubai Holidays