So I am working backwards on the latest 3 races in my "career". Tomorrow you'll hear about The Sandwich 50.

Race #1
Leading to last Thursday I was anxious, excited, and pumped for a race. Just not mine. You see, my wife visited the Sandwich last weekend with Abi, the uber cute 2 1/2 year old daughter of ours. When they pulled up to the Sandwich, Abi yelled "Bike Race"! All week she talked about wanting to "race my bike". 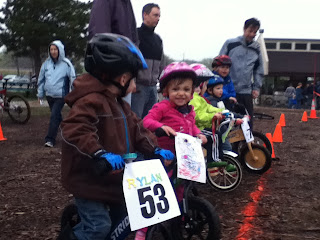 Thursday night rolled around and the 45 degree temps and mist in the air would not deter my little one. She spent a good 30 minutes on her Strider, getting warmed up for the showdown. On the start line the competition was thin, likely riders were fearing the weather. Despite most of the children being much more mature (she races the 4 and under group) she rode with all her heart; placing in the top five, she collected her prize as can be seen in the video. (NOTE: I AM NOT SURE IF THE VIDEOS ARE NOT WORKING OR NOT)


Race #2
I felt like poo during and after my race the previous weekend at the Sandwich. I was expecting nothing but a good way to get in an intense effort at Buck Hill. Some of the big dogs were absent, including Brendan Moore, the "Bad Boy of Mountain Biking". "Hairy" Barry would take off to the front at the start and slowly pull away. I spent the entire first lap in second place gasping for air, partly because my warm up could be measured in seconds. No one would pass me on that first climb which really puzzled me as I felt like I was going slow.

Early in the second lap Dave Oachs came by and then later in that lap I would get into a groove. I always come on strong in these races and hoped to catch him before our 4 laps were done. Unfortunately, he continued to pull away, as I did to the riders behind me. I would roll in, satisfied with 3rd place for the day and happy that my fitness was not as bad as first thought.

Oh, small tech note. I tried the XR0 tires from Bontrager for the first time. Holy crap they'll be used again! That is all.
Posted by Charly Tri at 1:51 PM

I literally just ordered some 29-0's, just wondering about the hook-up and if any issues in the bumpier/rockier stuff, the 29er tires only come in 1.9 and I was thinking 1.9 seems a bit thin...glad to hear you like em.

Traction was much better than anticipated. The drop in weight though was very noticeable. They just rocketed in accelerations. Casing wise, they are exactly the same as the XR1's. No experience in the really rough stuff, but I know Scott KJ used them at Cable without too much problem. There was plenty of rough trail and mud there.

Glad to know I have a nickname that is fitting finally=)

I am also happy to hear that "CAREER" is progressing nicely!