Well, down there in Decorah, IA those crazy cats self appointed themselves as the holder for the World Championship Fat Bike Race. Me with my itching desire to get in some fun in the snow and with $500 to the first guy across the line I figure the free entry and cost of gas for the 90 minute drive was more than worth the fun.

The conditions in the area had not been ideal. Leading up to the race there had been a rash of warm weather and little snow to the point that snowmobiles had not been allowed on the trails for the past week or 2, leaving the trail very hard to distinguish. Trevor Rockwell got to the front right away and I took up the caboose in our 5 person front group (Me, Trevor, Hollywood, Ben Shockey, and Ezra Taylor). My forgotten inhaler and lack of warm up and me apprehensive for the first 30 minutes, despite th use of my new breathing mask (more on that in another post). Riding next to a river in the trees the trail was easily visible and we plunged down hills only to plug back up the other side. Soon we were crisscrossing fields and weaving through patches of trees. This is where the trail became almost completely unrecognizable. Twice either Hollywood or I got to the front looking to increase the pace a tad and twice we went the wrong way. Thank goodness Trevor was there or we would have been wandering the Iowa countryside for days.

At some point the front group got down to H-Wood, Trevor and I as we headed through the checkpoint. We would soon hit the "snow dunes" on a flat straight part of trail. This trail had only seen a little foot traffic, but plenty or drifting and icing over, leaving us a very difficult task of trying to ride through. Out onto the a gravel road and our group of 3 was now 4 with the addition of Ezra and his modified fat Big Dummy.

Coming into town for the checkpoint. I am the one in the Darth Vader costume. 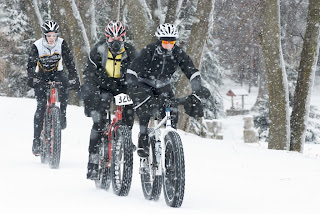 Because of the COMPLETE shut down of the rest of the snowmobile trails, our last 1/3 of the race was almost all gravel, unbeknownst to me. The style of power output taxed the cardio system more and my breathing had a hard time keeping up. I was not a fan of this and thought we had more sled trail to cover soon. My plan WAS to make a move on the next snowmobile trail as it seemed that is where I was riding best. Up over a small gravel rise Trevor attacked with H-wood on his tail. My breathing had gotten ramped up and I chased down the backside. My der must have jambed because I could not get in the smallest 2 cogs in the back and we were facing a very long slight downhill. The hill was steep enough that I needed the extra gearing to pedal, but not steep enough to coast and keep up. Ezra passed me by and caught up with the lead 2 riders.

As we went down the long twisty descent the top three smelled my blood in the water and stayed on the gas as I watched them fade away out of site. Resigned to getting 4th I plugged along until around a corner I saw a chance. Off the gravel was our last piece of snow trail up a larger switchback hill. A little lay into the gas and I made up a lot of ground by the top of the climb. With the finish in site we were all laying it out. I was able to pass Ezra and closed some on H-Wood, finishing in 3rd place. Trevor took the well deserved win.

With 3rd I got me a sweet trophy. I realized something; over the last few years I have had the privilege of obtaining so pretty cool and unique awards. So here is a pic of the bling from the Pugs Worlds, and then a shot of the award I snagged at the Tuscobia 75 miler snow race (all modeled by a future female pro mountain biker). Literally, these kind of awards would be a driving force for me to return to these races and compete.

Thanks to the guys in for Decorah for doing your part to keep mountain biking cool. See you at your TT in late April! Oh, and thanks to 9:ZERO:7 for making a bike that leaves me with no excuse not to do well! 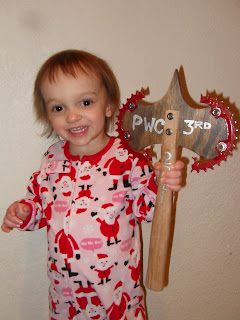 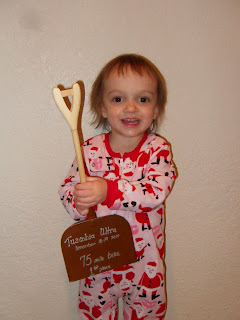 "all modeled by a future female pro mountain biker" ... or trailbuilder?