They left us in Rice Lake, WI expecting us to make our way back to Park Falls, WI on our own much like you would do with a homing pigeon. The Flattop rims got moving on the Bontrager equipped 9:ZERO:7 they would say at 9:20am. Chuck Lindgren would lead for a bit on our snowmobile trail back home until a soft hill had us pushing. I ended up in front, and after awhile there was a gap despite keeping my vitals in check. Off the trail, over the road, to the motel for the first checkpoint at mile 12 and back left just a view of an empty trail behind me. The pace would slow some as the pressure didn't seem to be coming from behind me and we still had a ways to go. 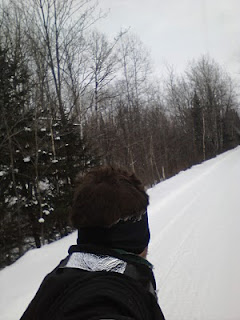 Roughly at mile twenty, I called and reassured the wife that I was not going to die that day, took a couple of pictures, and day dreamed. My daydreaming would end when a soft spot of snow caused a dab, and the image of a figure far down the trial behind me appeared. Race on.

The figure would disappear as I upped my pace. Forty Six miles in and time for a check point. Off the trail, over the road, into the motel room, and back. I adjusted what I realized was a falling seat post as well. A look back soon after being on the trail I would see the figure again. Hmmm? Race on still.

With 11 miles to go my legs were hurting in spots I was not accustomed to and that is when the trail decided to crap out. Stopping 3 times to drop pressure finally saw me being able to ride the mush that was a trail. After roughly 6 miles the trail hardened some. All this time I knew my seat was dropping on it's own. Not wanting to see the figure again I refused to stop and just pushed through.

I would stop the clock sometime before 5pm. Heading into the warming hut for some food where Tim would pat me on the head and say good bird. A first place for my efforts. I would pack up and leave the parking lot 90 minutes later, still no sign of the figure.

Notes:
-My seatpost had dropped a full inch again by the finish
-I suspected during the race that "the figure" may have not stopped at the mandatory checkpoints, and Tim more or less confirmed that. I figured those checkpoints cost me about 10 minutes each.
-I am now the record holder for the 75 mile race (sub 8 hours), but it is only in the 2nd year. Last year Dave Pramann won on a slower course in 10:19.
-Big Buff was able to fend off the Porn Stached Orange Squeezer for the win in the 150 in 17 hours.
-J-No overcame some serious troubles to finish out the 150 in 30 hours.
-Graveyard Napper would succumb to a previous illness. His body was properly buried next to the trail, valve caps were saved and then given to his wife.
-Tim Roe puts on a great event. Stocked rest stops with food and beds, sweet finisher medals and trophies to people that placed, transport to the start, and awesome hoodie. All for not much more than an XC race.
-Thanks to Tim, Chainreaction, and the 29crew.
Posted by Charly Tri at 8:16 AM

Atta fella, Tri. I thought you would do something like win.

It's a shame about Farrow. By the time I reached his grave, it already was looking like Jim Morrison's final Paris resting place.

I feared the worst for Farrow. I reached the checkpoint, his bike was there, he was not. A quick search showed the revolver was missing as well.

Bravo both Charly and Jason...Tri versus Andre versus Buff versus Oatley @ Arrowhead...should be a full-on classic!!!
Best regards,
C

Farrow, you are leaving out names that I would count in there as well. Considering this was my only snow bike finish (dnf @ arrowhead last year), I think itmay be premature to list me as a favorite.