For those 2 people that actually read my blog I am sorry for not posting in a long while. I am sure you have found something else to pass the time at work. Posting has lacked because free time has lacked.

This weekend was the Levis 100 Mile mountain bike race. If I can win one local endurance event in a year, this would be it. Levis is true mountain biking. I was able to pull out the big "W" last year after fighting sleepiness and a hard charging Dan Dittmer. This year's competition was more competitive than ever. I counted at least 3 other previous 12 hour winners (Chris Schotz, Tim Ek, and Lee Unwin), as well as a WI Pro dipping his toes in the endurance world (Chris Peariso). We were signed up to race 8 laps at 13.5 miles, 1400 vertical feet, and 95% singletrack per lap. The hills were steep and hard. The singletrack plentiful, rooty, and fun.

First 2 laps.
I took off like a crazed monkey at the start so that I could hit the singletrack first. After putting in a hard effort for the first mile it worked. Soon Chris P. and Lee were on my tail and came around to take the first 2 spots. My legs were not hitting on all cylinders for which I was blaming on not being warmed up yet. Chris P. finished the first lap way off the front as I came in at 1:04 with Chis S., Dan, and Tim. The second lap I was still not riding well. My legs had NO snap what so ever and I even stopped at one point to try to figure out if it was me or the bike. My hands and feet hurt. It felt as though I had ridden a 100 miles already. The legs were already starting to cramp. The bumps hurt more than they should, so I let out air. I would roll in a very distant 5th place after that lap. I resigned to riding out the race with hopes of something changing.

Laps 3 and 4.
My Baby's Momma and I woke up at 3:30 am to make the race. The thought was I may be tired after the second lap so a "vial" of Monster energy drink got shotgunned . Basically, it is a small bottle with 200mg of caffeine and a bunch of vitamins. After that I was rock solid. My legs had pep and I was on a tear. Lap 3 I was feeling great. I would catch Tim and then Chris S and soon would be out of their sight to sit in 3 place on the course. At the end of the 4th lap I would find Dan in the pits still.

Lap 5.
Dan would leave the pits only 20 seconds before me to start his 5th lap and the time check was that Chris P. was "very close". I was pumped, thinking that Dan and I were pulling back 1st and we were going good. I got in front of Dan and slowly started to pull away. About 4 miles in saw Chris P. trying to figure out why his rear wheel had no tension. This would move me in first and Dan in second. It looked like we were going to duke it out like the year before. I would finish the lap completely out of site of Dan, but was gearing up for a showdown once again.
.
Lap 6,7, and 8.
Lap 6 was ridden conservatively expecting a hard effort to complete the last 25 miles. Coming into the pits the time check was Dan was cramping about 10 minutes back. Lap 7 is were the first place team on the course caught up to me. The end of the 7th lap I would find out he dropped out due to heat exhaustion. Having suffered from that twice last year I felt for him. The second place team would also pass me while I pitted. The 8th lap was ridden steady to take the win for a second year. Chris S. would take 2nd and Tim would roll in for 3rd.

Notes:
-I ended up with 108 miles, 11,200 feet of climbing, in 9 1/2 hours. An hour faster than last year on a slightly longer course.
-I finished only 10 minutes behind the first place 4 man team (although they were only running 3 guys).
-A loose rock gave me trouble on the hardest hill on the last lap that forced me to walk 5 feet to get going again. That was the only time I had to walk part of a hill.
-I wish Chris and Dan did not have troubles. It would have been fun to battle it out the last couple of laps.
-The diet consisted of water, EFS shot, bananas, sport legs, and the Monster vial.
-I passed the Whizinator 3 times. I first saw him the day after the Cable Classic riding at Rock Lake. If you weren't in Cable with me then you don't know.
-Except the first 2 laps I felt strong, like bull.
-I pulled out a victory salute. Think Arnold Schwarzenegger in Terminator 2 as he drove his motorcycle with his left hand while firing a 12 gauge, reloading, all with the other.
-Becky was not only da bomb in my support, but she got in 13 miles of running while I was on the course as well.
-Abi hung with the Grandparents while we were out.
-My Gary Fisher Hi-Fi was PERFECT! The only thing I can imagine better would be something in OCLV carbon, with ABP, E2, molded BB cups. You know, something "super fly".
-BTW


Out on the course, trying to get my Hasselhoff look going on. 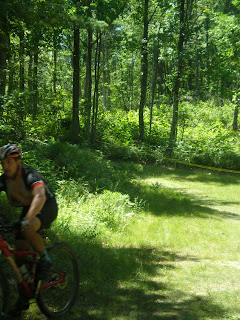 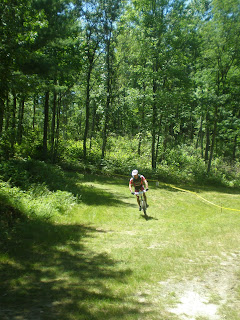 Swapping out gel, bottles. Check out the salt stains on the jersey and shorts. 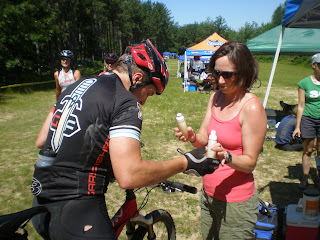 All done. It was a team effort. 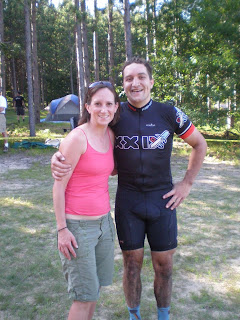 Good job out there. I basically fell apart going into lap 5. What a long day as this is much tougher than the first two 24 solos I did.

Nice work on a pretty tough course. I was the ss guy right next to you in the pits. Keep it up the rest of the year!

Good job Charlie on a tough course! It was good riding with you while it lasted.

Well Done Mr. Tri :) The "geared community" should be proud of you...I picked you to win it...
Cheers,
Charlie

Nice job defending #1 Charlie! I went over the edge after completing lap 8. My digestion shut down, so I couldn't keep any water or food in. I ended up in the Black River ER for a litre of lytes and 2 litres of potassium chloride. Levis simply beat me to a pulp.

Was it still fun? Ya betcha!