Gett'n extreme at the Chequamegon 40

Wisely, I rejected an offer to ride super fun single track so that I could pace line with 1,800 of my closest friends on 20 foot wide paths. Leading up to the race I was fighting a cold. Saturday morning and the wife asks, "You don't want to race do you". "Nope", was the response. I just felt like poopy. Last year I ended up with 26th place and the nagging thought that I had more left in the tank. I had wanted a top 20 place before the day of the race.

Off we go at the start. I took up my standard place at the back of the preferred start area and somehow was falling back during the neutral lead out. The race to the grass hurt and I was hoping that back ending a stalled tandem a mechanical would take me out. No such luck. I limped along dry hacking all the way. I rode the first 10 miles on the side of trail as to let others pass easily, and boy did they take advantage of that. Gobs of riders made their way past my already disappointing position in the race. I contemplated stopping and waiting for the wife so that we could ride together.

At some point my body got use to the constant hacking and rising pain in the throat. At the same time others in front of me started to slow. I must have passed close to 50-75 people between there and "OO". After that I continued to work my way up, even passing 9 people in the last 2 miles. Never did I stop hacking, never could I breath all that well. I ended up 64th overall, which surprised me as I didn't think I was in the top 100 after falling back so far.

I want to apologize for those during the race and after that I could not talk to. My throat was in severe pain and left my voice non-existent. Oddly, the only thing that loosened it back up to the rough "you have a cold?" voice was the Gu2O energy drink at the finish. So no, I was not snubbing you. I just couldn't talk. The one positive was that I never noticed the pain in my legs as the pain in my throat took precedent.

Fire ensued that night back at the cabin and stories were told by fellow Rochester racers. Abi slept soundly back in Rochester as her parents enjoyed a weekend up north without there child.

Next year I am sure I will be back for more "fat tire" fun and the elusive top placing.

From the last 2 miles, taken from skinnyski.com. 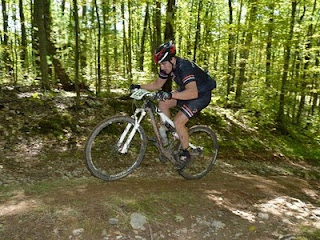 I'll trade you my good lungs for your sick ones. I'll still be faster.