So Sunday was the Cable Crit. My stomach was in a world of hurt, but I had already paid my entry fee. During preriding on the course I relieved stomach contents twice. Off the course, but still before the race I let stuff out another 2-3 times. Still, I had paid my entry fee, so I had to race. I pulled up to the line with knowing that 4 laps on there short course was going to be way to much for me in my condition. However, I new I could give an all out 1 lap attack. Well, I pull up to the line between Doug and Dan Sawnson (Pros), near Paul Hanson (Pro), near Brendan Moore (Semi-pro), and near Chris Fisher (Should be semi-pro). This line up only confirmed that my ass would hurt after the oncoming whooping in the race. At the start I could not help talk smack while I still could and kid about how my "light" tires were going to fly up the steep hill. Doug and Dan knew I was a little odd from racing way back, but I think they were weirded out. Well, at the gun I took off hard. I flew up the first steep hill in first and came down the other side while yelling at the others to catch me. Then I gave an all out sprint to the end off the first lap were I zipped up my jersey and raised my hands. I had won the 1st lap, which means absolutely nothing. Doug caught me shortly after, then Brendan, then everyone else. I finished last in my heat, but not before I left some more stomach contents on the course. Good times, good times. Had I felt good I would have been racing much differently. The rest of the day REALLY hurt.

I don't have a picture of the race, but it was kinda like this at the start (me on the left, Doug Swanson on the right). Yeah, he was scared. I think I saw him trembling in the race as well. 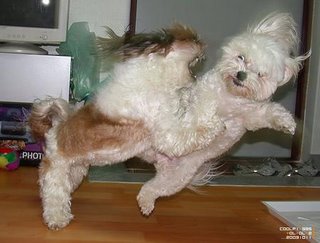 My wife Becky, runs marathons, but enjoys mountian biking as well. She did the 40 miler on Saturday with the 2 goals of finishing and having fun. After starting in the back, she ran across Ben Moore's mechanical at the first checkpoint and gave him the multi-tool I packed in her camelback to see if that would help him. It did not, so she went on. She would spend the day passing chumps up hill and then watching them fly past her on the downhill. Coming down Firetower she would crash hard. After getting up her hand hurt really bad and she was worried she may have broken it. She waived off the medics, worried they would make her stop the race. The last ten miles was ridden 1 1/2 handed, but she finished. The good news was there were no broken bones. Here she is.