So I loath running.  Really, I despise it.  Why would I want to run when I have a perfectly good bike?  I don't know, it just doesn't make sense.  Well, due to a set of circumstances I found myself signing up for the Des Moines Off Road Dirty Duathlon with my buddy Mark from Kansas City.  Wanting to have fun with it all we made our own "race jerseys". 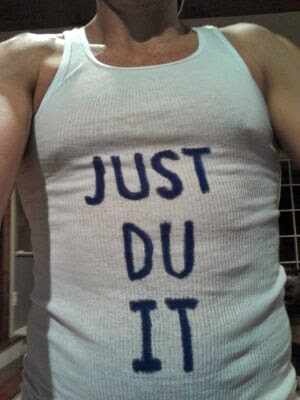 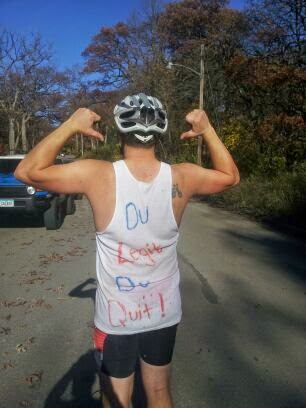 I was running about once a week for a few miles leading up to the race, complaining most of the way.  The course was a 2 mile run, 10 mile bike, 2 mile run.  The bike course was 3 laps while the run course was a shortened bike lap (got all that).  The course was all singletrack, nothing to overly difficult but with plenty that would trip up a beginning mountain biker.

The run went more or less as I expected.  Those that ran well left me to gasp and wheeze my way around the first 2 miles.  I hit the bike leg around 10ish? overall, including the teams.

That first bike lap confirmed that my abilities on the bike far outweigh my abilities running as I made my way into 5th very quickly.  The next few laps were spent passing lapped traffic, and trying to get the left calve to stop cramping when bunny hopping logs was needed.  The stupid run now had me getting odd cramps.  Towards the middle of the third lap I slid out on a corner and laid in pain for 30 seconds as my left calve completely locked up.  Onwards I finally went.

The run was a bit painful.  I sucked even harder and now I had weird muscle pains and walked the steeper hills.  Luckily I built enough of a gap on the bike I held onto 5th place.  Near as I could tell, the difference between me and the next 4 riders was their ability not to suck on the run.  I'll take that.  Mark would go on to win the race proving he is a stud.

Afterwards was fun hanging out with the cool Iowegians at the awards and having them take turns ogling the 9:ZERO:7 Whiteout equipped with Nextie carbon rims, Bike Bag Dude custom bag, and Wolftooth goodies.  The bike worked perfectly like always.

I would go on to put in another hour on the local paths as I have goals I am trying to hit.  Then loaded my belly with Chipotle on the drive back, because it is too damn good not to.  BTW, Des Moines is way cooler than I expected.