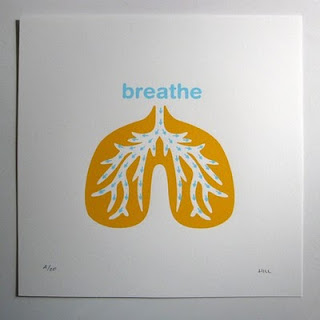 What does Moab, Arrowhead, and my ride this last Sunday have in common? They were all cut short with severe breathing problems. A trip to the small, but local Mayo Clinic got me pointing in the right direction. According to Dr. Scanlon (a seasoned cyclist himself), I have borderline full blown ashma. Technically though, I have exercise induced ashma. Three prescriptions later and I have a lot of optimism. One inhaler for shorter events and attacks, one for longer lasting effects for endurance races, and one to use twice a day for several weeks to get my lungs settled down and acting properly. The latter can be used later as needed as well.

The testing is humbling as I could not breath even though I had been doing nothing but sitting for the previous hour.

He even offered to write me a Therapeutic Use Exemption for WADA. That would be pretty sweet if I ever actually need it, but then I would need to stop the EPO and HGH cycles.

Well, now you should join your working buddies in the daily grind again.
Posted by Charly Tri at 5:36 PM

Charly,
I've bee struggling with this for a long time myself. I remember being diagnosed and asking when will I be back to normal... NEVER. I was so bummed. I actually have what is called small airway disease. I've fried all the small passages in my lungs so when I hit my limit, I've hit my limit. Off road racing is brutal on me for that reason. What did they give you for drugs? I'm curious.
Bob

Come to think of it, that must have been what I overheard when your wife was complaining about you and something "small".

Drugs in the order listed on blog:
Albuterol
Formoterol
Budesonide

Then on top of that I am going to start downing fish oil (you and another clued me in on that research) and I am experimenting with reducing or eliminating gluten as this has been a source of trouble for others. Plus, the Garmin team avoids wheat, and I want to be like them.

P.S. I have not seen your RASC membership for the Sandwich 50 yet...oh and you say you are curious, well there will be plenty of opportunity to explore that when at Eastwood. Oh, and I finally linked your blog. Your viewership will probably plummet now.

Cancel the link, I can't get your site to work. I remember having this problem before. Stupid macs.

You mean www.bobblogbob.com doesn't work on Macs? Funny cause it works on mine... You must be using that coke nail of yours to type again.
I haven't changed my diet at all. Maybe I should since I'm fat.
I'm on a mix of Advair, Singular, and Albuteral. Or what ever they call it now that they made it environmentally safe. It just doesn't have that kick like the real stuff had in the old days.
I just forgot to send the thingy in the mail box'e.

No, I can pull the blog up, but I can't get it to link on the side page and pull up there. It seems that blogs made with a mac account suck in the blogspot world.

And your not fat, it is just your clothing. At least that is what you are supposed to tell the women.

It works. Do not put in the www.
I was able to make it link from my bobblogbob1.blogspot.com site.
http://bobblogbob.com/
works.

Thanks for not calling me fat. At least my butt doesn't look big. Does it?

I just tried it that way, still no go. Also, it goes directly to the bottom of the "news reel".

It is not the pants that make your butt look big.