This is a fantastic race every year. This year the rain the day before and morning of was sure to make this year's time trials interesting. Set to start about 90 minutes after the first rider I was hoping that any mud on the course would get pushed out or packed down. Kuske and I had a chance to talk to the first several riders finishing and they said that the course was actually in good shape and they were able to make it up almost every hill on their single speeds. Their bikes and bodies were fairly clean as well.

Well, 100 meters in I quickly realized that this was a different course than earlier. The mud had started to solidify and gave it a sticky, flingy, slow quality. The trails were really chewed up from so many people before pushing through sections that were at one time rideable. I rode as much as I could, but some sections were completely impassable by bike now. There were many sections that I was riding (slowly because of the sticky mud) that had no sign tire tracks in front of me, just chewed up foot prints. Almost halfway through I threw my chain in to the spokes. After at least a minute of swearing, pulling, yanking, and tugging I was finally able to get the chain out and get going again. Ten minutes later it would do the same thing, but only took about 30 seconds to get out that time. Maybe I didn't get that damn set screw right (which would shock this mechanic), but I am sick of the SRAM chain that is on there. Shimano links will make that whole system shift smoother, faster, and quieter. Not saying it is the chains fault, but anything to take some blame off myself.

Well, I was hoping to go for a top 5 finish. I felt strong and rode well, but my chain problems and the mud convinced me that I was well outside the top ten. Luckily, I still pulled out a ninth place at 51 minutes and some odd seconds. I was very happy with that and happy that my legs had "good sensations". The bike and body were covered in mud, a far different picture then those first finishers I saw.

The top 5 were littered with guys from the first 30 starters. Strong guys indeed, but I wish I had preregistered and was starting near them. A well deserved win goes to Josh Shively from LaCrosse. My former manager from Smith's Cycling and Fitness crushed the field by 3 minutes to come in at 44 minutes. He was rocking a single speed Gary Fisher Rig with 1/2 ratio for gearing. Tough indeed and you could not find a nicer guy. Kuske took 7th, 2 minutes in front of me and other local Trevor Olson rocked out a 6th place. 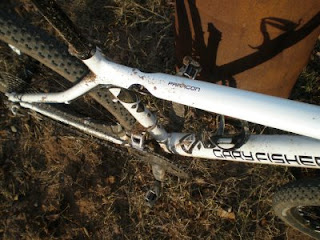 The Paragon was awesome and except for the chain (probably my fault) was a fantastic bike. Did I mention that I love this bike? I do have to say I tried the Bontrager Mud X tires. Kuske and I had fantastic experiences from these tires in the race. There are hands down the only reason I did as well as I did with the mud that I encountered. They are a must have if you are getting mixed up in the mud. Absolutely, amazing condition specific tire. Ran them at under 20psi and got them to air up tubeless with a pump. No air leakage. Awesome.